SETLIST: Intro: Take Me To Your Heart/Never Gonna Cry Again/The Walk/The City Never Sleeps; Love Is A Stranger; I Love You Like A Ball And Chain; I Need A Man; You Have Placed A Chill; I Saved The World Today; Who’s That Girl?; There Must Be An Angel; Miracle Of Love; When Tomorrow Comes; Baby’s Gonna Cry; Thorn In My Side; Here Comes The Rain Again; When The Day Goes Down; I’ve Got A Life; It’s Alright; Missionary Man; Would I Lie To You?; Sisters Are Doin’ It For Themselves; Sweet Dreams

We’re sitting in the front row next to a fan wearing a Eurythmics tour T-shirt from 1989 and we think the only time we ever saw the band live was probably around then at the old Wembley Arena.

We’ve seen lead singer Annie Lennox twice solo since then at Sadler’s Wells and at the Old Vic. Tonight’s celebration of their songs as part of Nile Rodgers’ Southbank Centre Meltdown is an opportunity to revel in some glorious hits that we haven’t heard performed live, in some cases, ever.

In his introduction Rodgers explains how Eurythmics are one of his favourite bands, how he wanted to showcase great songwriting and how he likes having Stewart around because he is 10 days older than him and it’s nice to have someone who is older than him in a room.

Guest vocalists step in for Lennox and we especially enjoy Stewart’s son Django’s take on I Need A Man and Rahh brings out the intense desolation of Here Comes The Rain Again, apt as the UK is bracing itself for unexpected storms.

Stewart makes for a shambling but engaging frontman and we enjoyed his story about a Bob Dylan visit to his Crouch End home late at night involving drinking, writing When Tomorrow Comes and sombreros.

Drinking is again given as the reason why the Eurythmics were never in a studio later than 7.30pm and Stewart explains that they never spent longer than half an hour writing a song.

He also touches on much of their appeal: that they effortlessly cross genres meaning they can be great things to many people who love music including electro, pop, country, 60s girl bands and rock. 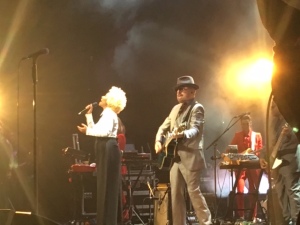 It makes for an entertaining two-hour ride through a varied back catalogue of astonishing songs which only ever occasionally doesn’t quite hit the mark.

Emeli Sande (see picture above) joins the party for an especially euphoric There Must Be An Angel but it is left to Beverley Knight (see main picture and video above) to absolutely boss a blistering final trio of songs ending perhaps with the song for which the Eurythmics are best known.

Sweet Dreams are very much made of this.