Goldfrapp last played in London when they headlined an Albert Hall gig in November 2014 and were joined onstage by kindred spirit John Grant to close the book on their downbeat, cinematic and folky Tales Of Us album.

Tonight they’re playing songs from their seventh album proper Silver Eye which is out on Friday (31/3). It’s always difficult when premiering new material that hasn’t already been released and a third of tonight’s set fits that bill.

Everything Is Never Enough sounds like a cross between Depeche Mode and The Dandy Warhols and may be the closest thing to a real radio hit on Silver Eye. 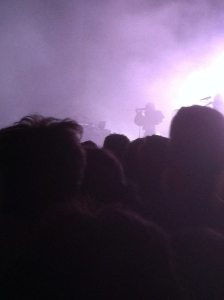 We’ve seen Goldfrapp many times before and often outside at festivals. It occurs to us tonight that it is outdoors where the more elemental of these songs are likely to work best, with Ocean and Moon In Your Mouth particularly dreamlike.

Indoors however lends itself to giant screens with stunning visuals which complement the songs brilliantly. Our favourite Goldfrapp songs are the big, dynamic hits which are pure Kate Bush fronts T-Rex for a Bolan boogie and this is how the set concludes.

Check out our review of Silver Eye in full on this site early next month. Goldfrapp have sold out their next London show at Somerset House in July already and play selected festivals this summer. Details below.