Newcomers The Fooo Conspiracy could be ones to watch in semi 3 (see below).

Imelda Staunton won an Olivier for Gypsy (see triumphant closing number above) and returns to the West End in Who’s Afraid Of Virginia Woolf? with Conleth Hill (Game of Thrones) at the Harold Pinter Theatre 22/2 – 27/5. Tickets

We last saw Sherlock‘s Andrew Scott in Birdland at the Royal Court and had trouble hearing him from the circle, a problem often associated with actors doing too much TV. Looking forward therefore to getting up close and personal with him at the Almeida 17/2 – 8/4, directed by Robert Icke and starring Almeida regular Juliet Stevenson. Picture courtesy Almeida. Tickets

4. Daniel Radcliffe in Rosencrantz and Guildenstern Are Dead

Swiss Army Man (trailer above) was nominated for one of our monstas as film of 2016 and Radcliffe’s performance as a farting corpse was no less memorable. During our Q&A with him last year we loved his enthusiasm for unusual roles. We’ve yet to see him on stage although we have seen his partner in this production (Joshua McGuire) at the Vic in Future Conditional. Runs at the Old Vic 25/2 – 29/4.  Tickets

Director Joe Hill-Gibbins gave us a modern-day reimagining of Measure For Measure, which earned a five-star review from us, at the Young Vic in 2015 and we’re looking forward to something as visionary in February. Stars include Anastasia Hille (Hamlet at the Barbican), Jemima Rooper (Hand To God at the Vaudeville) and John Dagleish (Sunny Afternoon at the Harold Pinter Theatre). Runs 16/2 – 1/4. Tickets 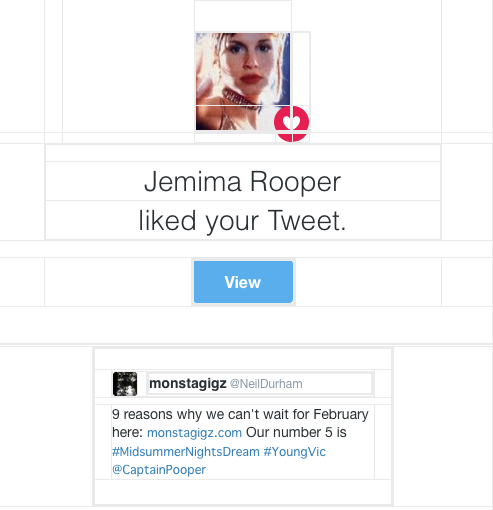 6. Ben Aldridge in Run The Beast Down

We loved Ben Aldridge (pictured above) in Fleabag and this is our wild card pick of the month at the Finborough Theatre. Runs 31/1 – 25/2. Tickets

7. The Pass nominated for a BAFTA

February is awards season and we’ve everything crossed for the film that won our monsta for best of 2016 in the Outstanding Debut category at the BAFTAs 12/2. Here’s our Q&A and review with Twitter contributions from author John Donnelly and stars Arinze Kene and Russell Tovey.

Last year we found ourselves with Coldplay in the Indigo2 after the Brits for one of our gigs of the year. Nominations announced 14/1, show 22/2. Everything crossed for Little Mix, Christine and The Queens and Shura this year.

The Oscars are awarded 26/2 and we’ve until 24/1 to wait for the nominations. We love the look of La La Land but it’s Moonlight (trailer above) that we’re wishing will do well.