It’s 6.45pm and our Q&A compere Mark Shenton, associate editor of The Stage, is telling us that its star Sheridan Smith is unwell and may not be joining us and her leading man Darius Campbell has to leave in 15 minutes.

Shenton begins gamely without either of them on stage although we do have cast members including Gay Soper, Marilyn Cutts and Joel Montague. Within minutes Smith, with baseball cap pulled over her eyes, and Campbell, clearly being protective of the nation’s favourite actress, emerge hand in hand to take their chairs centre stage.

Campbell has a recording studio to get to and is effusive about the star of Cilla, Legally Blonde and Flare Path: ‘She doesn’t stop. She’s the most consummate working professional in the business. She leaves all the blood, sweat and tears of a character on stage. She’s the most humble and beautiful soul. She doesn’t actually know how amazing she is.’

He also pays tribute to Funny Girl‘s director, Michael Meyer, who won his first Tony in 2006 for Spring Awakening and went on to even greater success with Hedwig and the Angry Inch. ‘I saw Spring Awakening in New York in its first week. I had a list of directors I wanted to work with and Michael was immediately added to that list.’

Campbell’s not been well either and had felt close to being sick. ‘Sheridan knows the show so well that when I screwed up last night she saved me.’

Campbell has to leave and Smith, dressed down in casual clothes and trainers with baseball cap remaining in place, waves at her mum in the audience who we are sitting close to. Funny Girl transfers to the Savoy in April for a six-month run and she bats away a speculative question about a Broadway run with a brief: ‘I don’t know.’

How does she retain her sanity playing a character night after night as familiar with joy as she is of despair? ‘It’s hard to leave it on stage and not to take it home. The audiences are always lovely and I wish I could take them home.’

She speaks fondly of Twitter and her interaction with her audience there. She’s a huge Streisand fan and is going to miss the intimacy of the Menier. Those of us who have seen Funny Girl here may notice changes to the Savoy version. The book has been re-written by Harvey Fierstein and the character of Nick Arnstein is going to become darker. Half a dozen dancers will also be added to the cast. 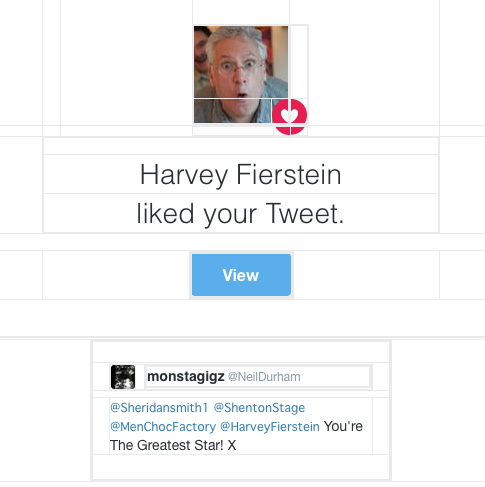 Smith is asked who’s next on her ‘bucket list’ of icons to play: ‘I don’t know. Cilla was good fun. Funny Girl wasn’t my idea. Sonia (producer Sonia Friedman) got in touch about it. I jumped at the chance. And then I thought, hang on, it’s Barbra Streisand, there’s a reason it hasn’t been performed since. Then I felt a lot of pressure. But I’ve been concentrating on playing the character of Fanny Brice.’

The cast talk about their plans for a well-earned break between runs at the Menier and Savoy. And Smith? She’s immediately off to Leeds to film a BBC1 TV drama. As hardworking as she is loved.

Funny Girl won our monsta for musical of 2015 and Sheridan Smith was our best theatre actress. We’re at the Menier for the production’s last night 5/3 and will also be at the Savoy for its run there.