The screenplay of Glenn Close’s current film The Wife was written by Jane Anderson, author of Mother Of The Maid, and the picture stars the actress’s real-life daughter Annie Starke.

Mother of the Maid is unusual because it tells the familiar tale of Joan of Arc from the perspective of her religious peasant mother.

We suspect Close’s interest in the role was pricked because it explores a mother/daughter relationship and the sense of sacrifice any parent must feel as they allow their child to find their way in a world that may embrace or shun them.

This is our 1st New York trip and we were impressed by the intimacy of the 232-seater Anspacher studio Theater we find ourselves in the 2nd row of tonight not least because it was the original home of musical Hamilton in 2015.

We’re familiar with the Joan Of Arc story because we saw the Donmar production of Saint Joan starring Gemma Arterton at the Donmar last year.

Here Grace Van Patten (pictured above) plays Joan with, to our ears, a Brooklyn accent which jars with the Irish lilt of her father given life by Dermot Crowley. We’re in 15th Century France with traditional dress and Joan believes she receives visions of saints, is used as an emblem by the French in their war with the English and later taken prisoner.

It’s little surprise that Close is 2nd favourite with the bookmakers to be awarded the Best Actress Oscar for The Wife on the evidence of her performance here. 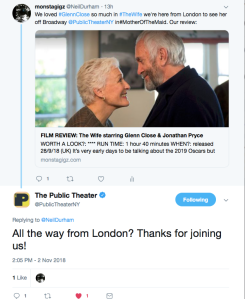 We’re delighted to be quite so up Close and personal to see how phenomenal she is. There are several moments when she has the audience in the palm of her hand – not least when she is howling in pain towards its conclusion – and we can hear sobbing all around us, although we are not quite so moved.

We last saw Close on the West End in Sunset Boulevard  and we felt then that her 5* performance lifted 3* material – and we feel the same here.