WHERE? Hayes Theater RUN TIME: 3 hours (including a 20-minute interval)

Harvey Fierstein is probably best known now for writing the book for Cyndi Lauper’s hit musical Kinky Boots but in the 70s he penned something truly groundbreaking and ahead of its time which is revisited brilliantly here.

The original Torch Song Trilogy was a 4-hour play in 3 acts that began life in an abbreviated version off Broadway in 1978. Later its fullest form would win Best Play and Actor Tonys in 1982.

Original star/author Harvey Fierstein revised the original and this version, starring Ugly Betty‘s Michael Urie and Mercedes Ruehl as his mother, was successfully revived Off Broadway last year before its transfer to its original home.

This version contains the same structure as the original with the action contained in 3 acts: 1971 (where we meet Arnold the gay drag queen who is looking for love but finds bisexual Ed), 1974 where Ed and his wife entertain Arnold and his younger, model boyfriend), and 1980 where Arnold’s mother meets his adopted son. 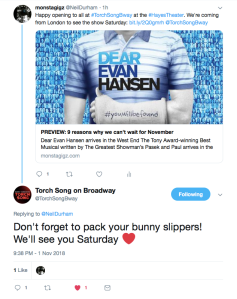 This version may not have been updated in terms of the years in which it is set but it does feel as though its attitude to bisexuality and gender fluidity have been refreshed in an edit which sees nothing of the original’s unflinching wit diminished.

At intermission we’re gossiping about how its 70s/80s Oscar Wilde and sure enough there’s a Ballad Of Reading Gaol reference that underlines how important education is and how difficult it is for people who are denied a history to find any community in their society.

We’d seen Michael Urie (pictured above) before in TV on Ugly Betty and at the Menier in London in the (for us) underwhelming Buyer, Cellar but he wins us over here. Fierstein wrote this and is incomparable in the film version but Urie’s take is much more than mere imitation, bringing a more youthful take to the role which should chime more with audiences now.

Ruehl, who receives a round of applause as she appears, has a difficult path to tread as the mother who has clearly influenced her son but couldn’t be more different to him in other ways.

This production is brilliantly realised, remains massively funny and deserves to burn long on Broadway – and we’d love for its flames to spread to the West End.