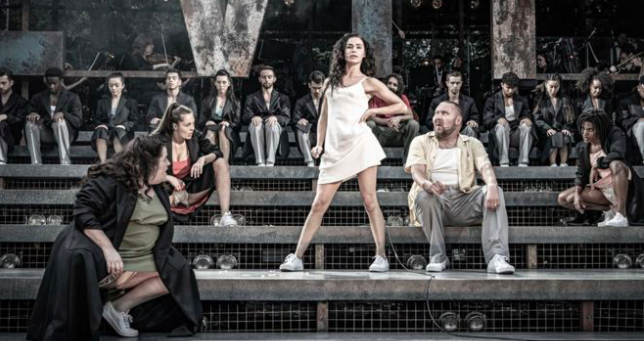 STOP PRESS: This production of Evita is now booking at the Barbican 27/6 to 22/8/20 Tickets

It’s apt that in the week where UK girl group musical Six announces its Broadway transfer, that the latest actress to play Evita should have the voice of Anna Kendrick and the moves of Cheryl Cole.

Director Jamie Lloyd has always had an eye for the visually inventive and arresting and after his middling recent Pinter at the Pinter season he runs an absolute riot here.

Particularly memorable is his use of popping balloons filled with ticker tape and his return to musicals boasts a 29-strong cast throbbing with as much energy, enthusiasm and life as Glee to the power of High School Musical.

His Evita, Samantha Pauly, is like no Evita we’ve ever seen before and she’s as streetwise and sassy as the modern dance moves she busts throughout this production. Sparks fly when she meets Colonel Peron (played with a charming menace by Ektor Rivera) during standout I’d Be Surprisingly Good For You. Trent Saunders is also a fine-voiced and tortured Che.

Elsewhere the formation dancing on a stage consisting simply of 14 steps up to a ledge where the orchestra sits is so on point that many of the numbers boast both the thrill and glitz of pop videos. Particularly well-received at this 1st preview are Buenos Aires and And The Money Kept Rolling In.

If we had one criticism it is that this story seems such an odd choice for a musical. Evita is based on the true tale of the rise and fall of an Argentinian dictator’s wife who rails against the Establishment while becoming beloved by the public.

It arrived in the West End shortly before Margaret Thatcher became Prime Minister and was a favourite of both hers and now US President Donald Trump.

Unusually for a Lloyd Webber musical it has considerably more than 1 memorable tune and, while we felt the revival of Joseph currently running at the Palladium highlights some particular lyrical howlers, there are some elegant lines here, not least: ‘Although she’s dressed up to the nines, at sixes and sevens with you.’

This venue is one of our favourites in London because when something works here, outdoors as the sun sets, there’s nothing quite so magical in theatre. This Evita is so sharp, youthful and spectacular that it’s definitely worth crying tears of joy for.