Carole King can lay claim to the title of the most successful female songwriter of the latter half of the 20th century with more than 100 US hits to her name between 1955 and 1999.

Even so we weren’t expecting to hear quite so many familiar songs that we loved from yesteryear including Aretha Franklin’s (You Make Me Feel Like A) Natural Woman, the Monkees’ Pleasant Valley Sunday and One Fine Day by The Chiffons.

Beautiful is the story of Carole’s early years, how she met her husband Gerry Goffin and how they became songwriting partners.

It’s particularly relevant to the present day because we see how a woman makes it in a man’s world thanks to her huge talent.

The musical is at its most fun when we see the competition between Goffin/King and friends and fellow songwriting team Barry Mann and Cynthia Weil. The use of the latter’s compositions also allows the even more unexpected inclusions of On Broadway by The Drifters and You’ve Lost That Lovin’ Feeling by The Righteous Brothers.

Back to the plot and when the Goffin/King relationship sours, Carole finds her solo voice with classic album Tapestry and adored songs like You’ve Got A Friend and I Feel the Earth Move.

The story reminds of Dreamgirls, currently wowing the Savoy, thanks to its emphasis on charts and songwriting. It even recalls Motown – the Musical thanks to the amount of hits stacked in this particular jukebox.

But we think it probably sits between the two in terms of audience satisfaction. Cassidy Janson follows the Olivier Award-winning Katie Brayben and gives an outstanding performance that is very much the beating heart and soul of a hugely enjoyable show. 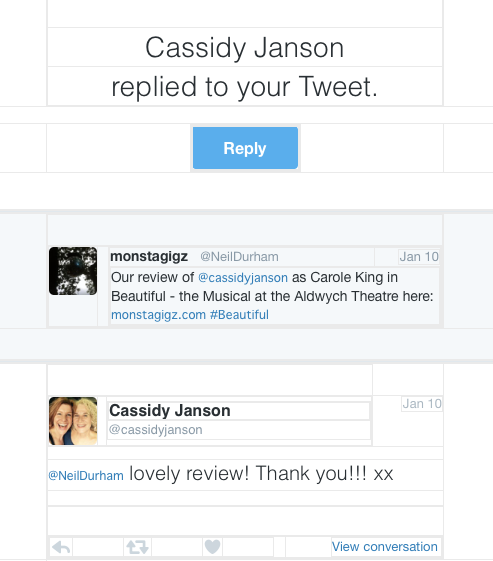