These are just two of the more amazing stories that this 83-year-old actress, who had a leading role in groundbreaking 60s US prime-time TV show Star Trek, tells a BFI audience on London’s Southbank that gives her a standing ovation as soon as she appears clutching a walking stick. 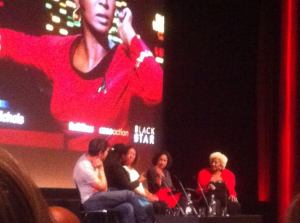 BBC journalist Samira Ahmed is our host and asks Nichols about Martin Luther King convincing her to stay with the show at a time when US cinema audiences were segregated by their colour. ‘I wanted to do some other things,’ remembers Nichols. ‘I had offers and was going to leave the show to do something different but I discovered there wasn’t anything more different than what I was doing.’

Departing US president Obama admitted he imagined talking to Nichols’ character. ‘He said: ‘I talk to you often.’ The thing is that people know she’s going to give you the right answer and it’s one you can live with.’ 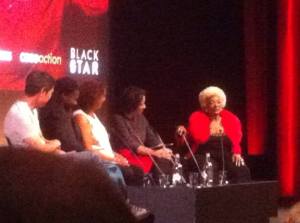 Nichols is on board with the utopian ideal of a world of different nationalities and cultures working together that inspired so many young viewers, monstagigz included. ‘It doesn’t matter whether you’re black, yellow or red – are there any other colours? You can ask me anything and I may, or may not, answer.’

Nichols is on a panel with the BBC’s Sky At Night presenter Dr Maggie Aderin-Pocock who tells Nichols: ‘I became a a space scientist because I wanted to become you.’

She’s with fellow BBC presenter Dr Kevin Fong who talks about his friendship with the black man who runs NASA, who Nichols has recruited for, and was rejected much earlier in his career by the US Air Force because of his race. ‘It’s the biggest: ‘Screw you!’ to the US Air Force ever.’

A sense of how groundbreaking Lieutenant Uhura’s character was is perhaps best described by actress Whoopi Goldberg who said: ‘There’s a black woman in it and she’s not the maid.’

Nichols says her favourite Star Trek episodes were those where she escaped the confines of the ship’s bridge although she understood that her role as communications officer meant she was often marooned there.

Fans of the more recent films will be intrigued by the relationship between Uhura and Spock which becomes more explicit in the reboots. Asked about any hints of early romance, she says: ‘I’m saying nothing.’