Sir Ian McKellen is telling the BFI audience about his relationship with Shakespeare because the venue has put his Richard III at the heart of its celebrations for the 400th anniversary of the bard’s death later this month.

McKellen will accompany a remastered version of the 1995 film on a tour to cities including Beijing, Shanghai, Mumbai, Moscow and St Petersburg.

He’s ‘just thrilled’ that an app he’s made with great friend Sir Derek Jacobi of Shakespeare’s The Tempest (McKellen as Prospero, Jacobi as Gonzalo) will be released 23/4.

McKellen does like a gossip and he mentions Kenneth Branagh’s much-anticipated Romeo and Juliet at the Garrick (also starring Jacobi and opening 12/5) will be an abbreviated two-hour whirlwind. ‘I can’t wait. It’s very exciting.’ 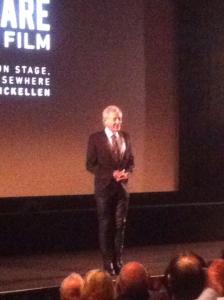 McKellen enthuses about seeing 11 and 12-year-olds in Los Angeles, for whom English is not their first language, performing Shakespeare regularly. ‘Who would have thought a story from 400 years ago in a foreign language would resonate? But Measure For Measure is a story about corruption and they know all about that.’

He reveals theatre director Michael Grandage told him it was a touring production McKellen brought to Grandage’s Cornwall school that encouraged him to pursue a theatre career.

‘For as long as I can remember Shakespeare has been part of my life,’ remembers McKellen. Twelth Night in Wigan was his first theatrical experience although he remembers nothing about it. ‘I begged to go back and saw Macbeth when I was about nine years old. That I do remember. It was terrifying.’

By the age of 12 he was playing Malvolio in Twelfth Night and has since starred in more than half of the bard’s 37 plays. ‘I think modern day dress is the only way to do it.’

His favourite advice involved wailing in Coriolanus after killing his nemesis. ‘You can’t do Shakespeare unless you dare.’

He speaks with regret about never playing Antonio in The Merchant of Venice in a screenplay he’d co-written with either Patrick Stewart or Al Pacino as Shylock.

He closes with his own tribute to the bard: ‘He wasn’t for an age but for all time.’