TRACKLIST: The Only Exercise I Get Is You; If You Could See Your Faults; Somebody’s Superhero; Big News in a Little World; You and Me (Were Meant To Be Together); The Outskirts Of The Dancefloor; So Happy; A Good Day Is Hard To Find; Fat Of The Land; All Of My Friends; The Prison; House Party 2; He’s Got What I Had; New York Ivy; MCR Calling; My Legal High

Over 30 years ago on BBC Radio One’s much-missed Round Table single review show star Cyndi Lauper misheard the lyric of The Beautiful South’s brilliant Song For Whoever as: ‘I love you from the bottom of my pants OK.’

Rather than ‘pants OK’ it’s actually ‘pencil case’ which perhaps tells you as much about the broad strokes of Lauper (co-writer of the fab musical Kinky Boots) as it does about the quintessential Englishness of South songwriter Paul Heaton.

Manchester Calling is Heaton’s 4th album with his former Beautiful South frontwoman Abbott and Heaton’s lyrics are often at their strongest when they focus on the female point of view. Stand-out tracks for us include the Motown stomp and melancholy of If You Could See Your Faults.

When Abbott sings the heartfelt: ‘When they look back on my journey, My behaviour, my choice of men, I may not be widely respected, More a fool just now and then. Those suffragettes sure had some courage, But also half this land’s support, I had simply nobody Whenever I fell short.’ they are lines one can imagine no one else attempting.

Heaton’s had a remarkable pop career. It seems hard to believe he started in chart-topping ‘4th best band in Hull’ with Fatboy Slim (the Housemartins) who were as comfortable singing about socialism as they were about christianity. Compilation album title Now That’s What I Call Quite Good summed up their self-deprecating sense of humour.

We first saw The Beautiful South at Aldershot’s intimate West End Centre around the time of Song For Whoever and it was clear then not only what an accomplished songwriter Heaton was but also that he wasn’t about to be defined only by his success with the Housemartins. Abbott wasn’t The Beautiful South’s first female lead singer and she left before the band called it a day after 10 albums in 2007 citing the classic ‘musical similarities’.

Uptempo A Good Day Is Hard To Find is contrasted by some downbeat lyrics which speak of a complex relationship with alcohol: ‘On a Monday, I get up at 6, That’s a.m. for you drunks, In bed before 9:30 That’s p.m. for you punks.’ as well as: ‘The pubs will all re-open, And the streets will be all be lined, When one of us, A good day we may find.’

House Party 2 boasts another fine lyric in: ‘I’m a woman in her 40s who’s been right around the block and it’s likely that I’ve heard your tale before.’

The musical palette’s more ambitious than you might imagine and there’s even a credible attempt at ska on New York Ivy.

We last caught up with the pair at Glastonbury in 2016 when we said: ‘It’s Sunday afternoon and we weren’t expecting these two to mine their Housemartins and Beautiful South back catalogues quite so successfully and extensively here on the Other Stage. A great closer from their current album proves Heaton’s lost none of his fire.’ 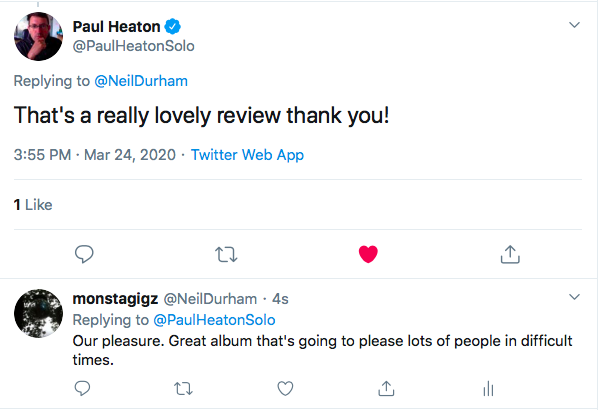 This album debuted at number one and it’s a fine collection which will no doubt be realised in impressive form when the band tour this autumn for rearranged dates including two at London’s Palladium.