We’ve admired David Dawson (pictured above with Cassidy) in TV’s The Last Kingdom and The Hollow Crown but we’ve never seen him perform in theatre until now.

We mention this because it is Dawson’s role as Casimir, the only son in a once-important family that has lost its way and now, like the 1970s Irish big house in which this play is set, is going to seed, that most moves.

In the first act he is a childlike mix of twitches and enthusiasm for barefoot games of imaginary croquet which reveals itself to be a cover for a touching acceptance of the way he was viewed by his father at the play’s conclusion.

Casimir has 3 sisters and here the family is reunited for the wedding of pianist Claire whose thwarted ambition is matched by Alice’s (Cassidy, never less than mesmerising) descent into alcoholism and Judith’s (Eileen Walsh, convincingly feisty) selflessness in caring for the ailing father who has almost lost his grip over them. 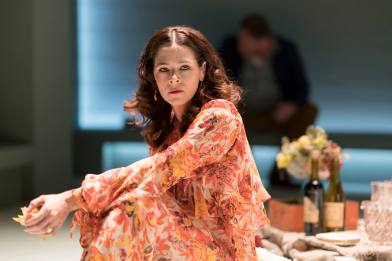 Emmet Kirwan was particularly good as Alice’s husband who is angry about what he has found after marrying into the aristocratic family. Although we were slightly distracted by the out-of-period, Calvin Klein label continuously peaking out from his underwear to the world to take him too seriously.

Line Of Duty‘s Paul Higgins also appears here as an awkward plot device to encourage the family members to reveal more of themselves and the relationships they have with those ordinary folk who live around them.

How to reimagine the once grand setting in the confines of the Donmar? We enjoyed the peeling back of the wallpaper at the back of the stage but felt Es Devlin’s minimalist design (doll’s house, anyone?) a little too rehearsal room.

Lyndsey Turner’s direction was also rather languid at the show’s opening and, although this mirrored the picnic weather, it did mean that it took a while for author Brian Friel’s well-constructed Chekhov homage to grip.

His Translations at the National closes tonight in what has been a triumphant revival. This production is not quite that but it does single out Dawson as a versatile star about to burn ever brighter.