We were at the first preview of the Young Vic production of Cat On A Hot Tin Roof at the Apollo Theatre in July when Jack O’Connell decided to perform naked. Review

2. When Áine Cahill shared her Glastonbury shortlist news on Facebook 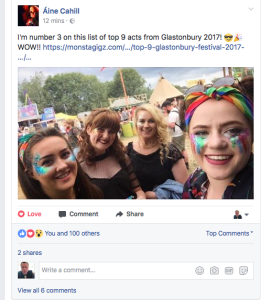 We shortlisted Áine Cahill’s Glastonbury performances as our third highlight of this year’s festival and she shared her joy on Facebook in June. Look out for her in 2018.

3. When the stars of TV’s Queers took to the Old Vic stage

Artistic Director Matthew Warchus has introduced a One Voice series of monologues to our favourite venue. This was curated by Mark Gatiss in July and also featured on BBC4. ‘Fionn Whitehead gay’ was the most searched for term on the site this year

We weren’t big fans of Ms Hart as the baddie in this musical but Strictly judge Revel-Horwood was a revelation in September. We’re seeing him in panto in Southampton before the year is out (train strike permitting).

5. When Lin Manuel-Miranda appeared in our audience 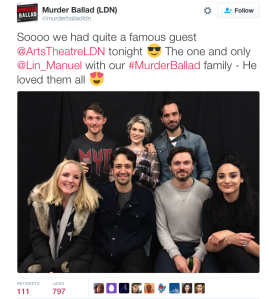 That moment when you bump into the creator of the world’s biggest musical – in the gents in a tiny West End venue. In, whisper it!, 2016.