It’s almost 200 days since the UK voted Brexit and this week we choose our 2017 Eurovision entry.

Given the circumstances, and a gig tougher than Trump’s inauguration, it seems little surprise that there are no big names among the half a dozen contenders.

That they’re all former X Factor contestants perhaps gives a sense of the creative bankruptcy of that show coupled with the Eurovision requirement to be able to cut it live.

Olivia made it to Judges’ Houses in the latest series of The X Factor and the parping horns underscoring the chorus remind us of Michael Buble’s cover of Cry Me A River. Lovely false ending with about 30 seconds to go. Much will depend on the performance but for us this is the song to beat. Bookies’ second favourite.

Holly was axed pre-bootcamp from X Factor 2015. She sounds like she’s a strong vocalist and although we’re appreciating the stalking piano it’s all a bit misery ballad for us. Looking for an early loo break? We might just have found it for you.

3. Lucie Jones Never Give Up On You EUROVISION FINAL POTENTIAL: 11th to 15th

We’re going to see Lucie in a touring version of Rent in Woking in March and this song is probably the bookies’ favourite because it was co-written by 2013 Danish winner Emmelie de Forest. The lyric reminds of Emmelie’s winning Only Teardrops but we’re just aching for it to be a little more dramatic. Lucie was 8th in 2009, four places behind rival Danyl Johnson (see below) and two behind former finalists Jedward. With a big musical theatre performance, this might just sneak it.

Looking for the most obvious Eurovision choice? Couple a cliched lyric with what sounds like the catchiest bits of different songs welded together and we have something hugely uptempo which needs handclaps and crowd participation to sell it. We remember Danyl as charismatic if a little hard work in his X Factor days and if he can spur the crowd on with him, this has an outside shot.

Salina didn’t progress beyond The X Factor audition stage in 2012 and isn’t shy of comparison with her distant relative Italian actor Marcelo Mastroianni of La Dolce Vita fame. On first listen, this was our initial favourite not least because its tropical house feel makes it the most current sounding of our crop. But the clunky lyrics really don’t merit any attention.

6. Nate Simpson What Are We Made Of? EUROVISION FINAL POTENTIAL: 21st to 26th 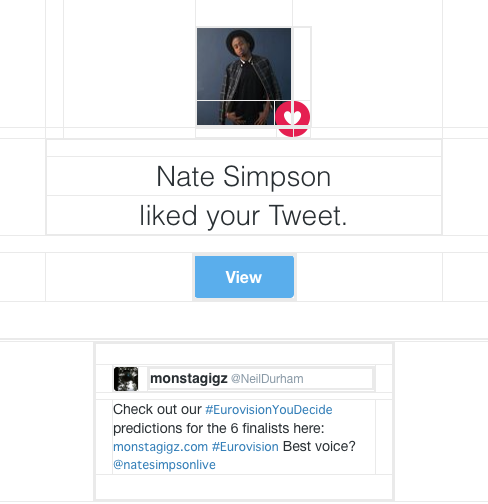 The best voice in the competition unfortunately has its worst song: a spartan ballad with piano-led backing that just doesn’t go anywhere.