The Smiths tour The Queen is Dead. I am 15, heavily into them, and can’t go because I’m on holiday in Spain. Yes it was a lovely holiday. No I’m not over it. I can smile about it now but at the time it was terrible.

Fast forward, ahem 30 years, and The Smyths announce their The Queen is Dead 30th anniversary tour. Hurrah! At last! Although I didn’t review them for that gig, I saw them again on The Songs That Saved Your Life gig last weekend.

The Smyths, having formed in 2003, proclaim their passion for the group enables them to recreate gigs for the audience of today. The new Mozzer is indeed very Mozzer-like. Speaking softly in between songs, you can almost believe by listening to him that he penned those lyrics. Physically resembling a young Steven Morrissey, he drapes himself around the mike, dressed in flowery shirt and jeans for this gig, a Harris tweed jacket for the last.

Sharing Mozzer’s sense of humour, he noted at this gig: “While the boys tune up and I straighten out my trouser legs, I realise – what different priorities”. The rest of the band do not resemble Marr, Joyce or Rourke, but this matters not.

A friend who did see them in Cardiff on that tour assures me they are extremely good and similar. As with any band, the first time you see them, there is magic. There is the unreal. You are (almost) seeing a god. I had this with Adam Ant; I just couldn’t believe he was so close to me. And it’s not the teenybopper thing; I felt the same with Peter Hook. I did feel something when I saw The Smyths.

Hearing The Queen is Dead album in full, in particular The Headmaster Ritual (one of my absolute favourites), I sort of stood still and swayed, eyes closed, inhaling the music of my teenage years. No, I didn’t have an angst-ridden time, but I probably thought so at the time. (Think Daisy’s flashbacks in Spaced!)

But these words definitely did save your life, when you lay in awe on your bedroom floor. Yes I am older now and I definitely am a clever swine, but they were the only ones who ever stood by me. I did feel this when I twice saw Morrissey live. When he sang There is a Light… I had a lump in my throat. That lump wasn’t there with The Smyths, but maybe if I hadn’t heard the master sing it first…? 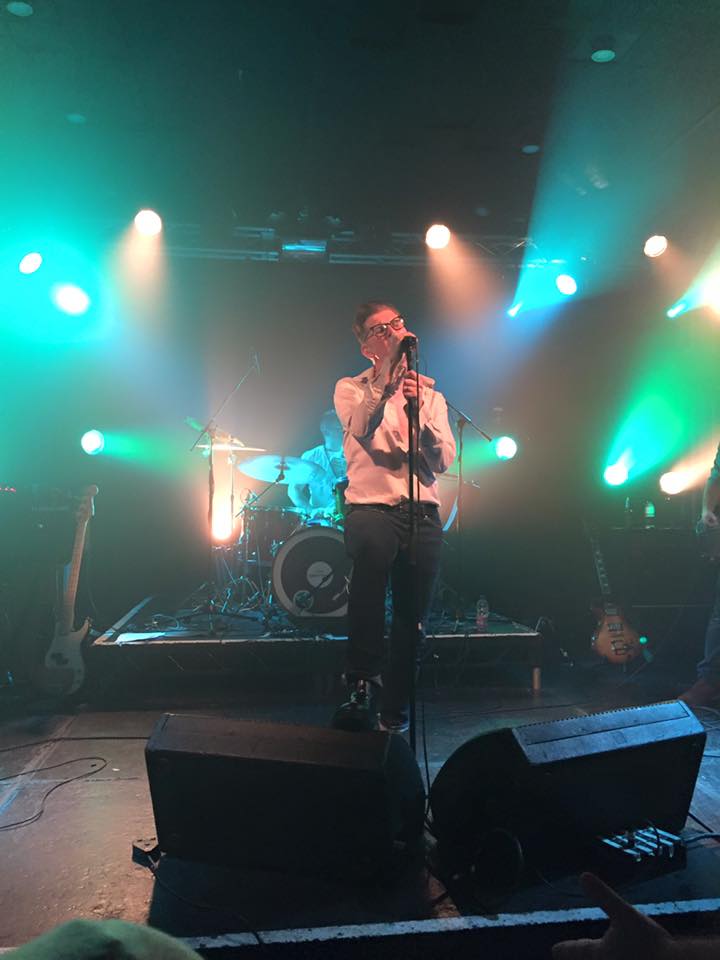 And Johnny Marr at Victorious last year – well his version of Bigmouth was awesome because no one, but no one, can play the guitar on it like him. Ditto How Soon Is Now. But it misses something – Morrissey’s voice. And that’s where The Smyths shine – they “have” Mozzer’s voice.

Two bugbears of mine with The Smiths have been Heaven Knows I’m Miserable Now and Girl Afraid. It’s like they said I know, let’s play right into the stereotypical Smiths depressive lyrics and music that everyone expects of us. Ridiculous.

When I heard The Smyths sing them, so powerful were their versions, that I refused to really sing along with the songs, folding my arms, before remembering this was NOT the band who wrote them! My refusal to engage was directed at the wrong people. As I’ve written many times before, there’s something about singing lyrics at the same time as hundreds of other fans, especially those you can see around you. Seeing a massive, bald bloke getting teary-eyed to How Soon Is Now is really something indeed. What did those lyrics mean to him?

And we know lyrics are king with The Smiths. As much as we adore Marr’s jangly guitar, it’s the way Morrissey’s lines scan and show you what’s inside his head that keep us fans. When I was listening to Louder Than Bombs before the gig, it occurred to me that Morrissey would be an able candidate for the Nobel Prize for Literature. There are too many to write here and I just can’t explain what is so amazing about the lyrics. For example: “Sad, veiled bride please be happy Handsome groom give her room Loud, loutish lover treat her kindly (Though she needs you more than she loves you).” “Oh the alcoholic afternoons When we sat in your rooms They meant more to me Than any, than any living thing on earth…”

Typing them out, it doesn’t work. You have to hear them, sing them, feel them. Obvious popular tracks (There Is a Light That Never Goes Out, What Difference, This Charming Man, How Soon Is Now) please the crowd no end.

There does seem to be an unrepresentative amount of (and yes I’m stereotyping here) old-ish, alpha males who seem to stand merrily at the back for the majority of the gig (they’re probably the ones talking loudly through the emotional bits!), but then surge down to the front three songs before the end to take the spaces (mine and my friends’!) who have been hugging the front and second standing rows the whole time, creating a mosh pit that (according to a coat lady at the venue) is seen only with this band.

I am no stranger to a pit of mosh, but this is something else. Am I wrong in feeling that Morrissey wouldn’t have been happy with the pure physicality of the pushing around of us fans? Maybe, I don’t know. I left during the last song, This Charming Man. (I will be at Shiiine Weekend in a few weeks, and because of this, I won’t be seeing The Smyths again; it has put me off.) Let’s hope that the venue is full of real fans who appreciate the sensitive songs as well as the ones we can go wild to, for a true atmosphere is certainly evoked by this band. The Smiths are no longer, long live The Smyths.