‘It’s been described as an olive branch from the weirdos to the closet weirdos,’ says Daniel Radcliffe, talking about his new film Swiss Army Man which we’ve just seen.

‘If there’s a message to the film it’s: ‘Whatever keeps us from loving ourselves; we should be more accepting of the weirdness in ourselves and the weirdness of others and then the world will be a happier place to be,’ the Harry Potter star tells the audience at London’s Picturehouse Central before the film’s 30/9 release. 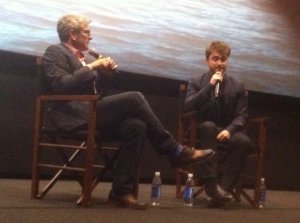 In the film Radcliffe plays corpse Manny discovered by suicidal Hank on a remote beach. Hank is played by Paul Dano (right, main picture), fantastic at the heart of BBC1’s War And Peace earlier this year.

Manny is the titular Swiss Army Man who proves exactly what Hank needs to escape his predicament. The flatulent corpse provides a jet-ski for Hank to mount; the water from his mouth saves Hank from dehydration; and Manny’s erections (yes, I’m not making this up) point to the direction home.

Radcliffe doesn’t speak for the first 20 minutes and his half-sentient corpse relies on Hank to teach him about the world and their friendship proves a rescue for them both. Interviewer Jason Solomons (pictured immediately above right with Radcliffe) says the film’s tagline could be: ‘It takes one dead guy to teach us what it means to be alive’.

Radcliffe describes it as a mixture of Samuel Beckett and the Farrelly brothers with its own brand of ‘magical realism’.  Flatulence figures highly in the film although Radcliffe says none of his farts are actually featured. ‘On day one they said: ‘If anyone wants to donate a live fart to the film’s soundtrack go and see Steve the sound recordist. I felt bad for him but I think one of Paul’s made it.’

Radcliffe is asked about Dano’s directorial ambition: ‘I’d be very excited to see anything he did as a director.  His career is absolutely something I’d aspire to. He picks brilliant scripts and everything he’s been in has been interesting.’

Radcliffe confirms he too would one day hope to sit in the director’s chair. He credits the Harry Potter series for giving the freedom to make this indie film. ‘I’m incredibly grateful to Potter. I did have a childhood, I had a good time.’

Swiss Army Man certainly won’t be for everyone but it’s a wildly imaginative film we’ve not seen the like of before and its ending (which we won’t give away) shifts back and forth before shedding new light on what has gone on previously.