Our last same-day multi-play event like this featured four Shakespeare plays by the Royal Shakespeare Company starring David Tennant at the Barbican over a January weekend.

For an audience they can be quite exhausting but they do give the rare opportunity to see a body of work within a short period of time and to get to grips with an author’s preoccupations. 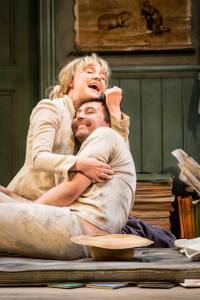 Platonov (James McArdle pictured with Olivia Vinall) was an early play never performed and discovered 20 years after the author’s death. It’s farce, not what one would usually expect from Chekhov, and is about a man irresistible to the women around him as their way of living falls in on them in mid-19th century Russia.

It’s the least accomplished work on show today but McArdle (again immediately above) makes for a magnetic Platonov and Nina Sosanya is particularly good as a woman in debt torn between doing the sensible and, alternatively, the natural thing. 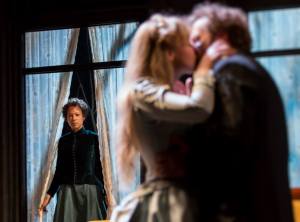 This was the first play Chekhov actually completed and its themes will be much more familiar to those with some knowledge of his work. The titular hero (Geoffrey Streatfield, broodingly excellent and pictured above with Vinall) has a dying wife (Sosanya) he betrays and is challenged over his honesty by her doctor (McArdle).

Watching both early plays it becomes obvious how concerned by money (especially the lack of it), debt and how this influences behaviour that the author is exploring.

A beautiful country house set which also features a lake is used throughout all three plays which makes the running of the cycle with the same cast in the same venue possible. 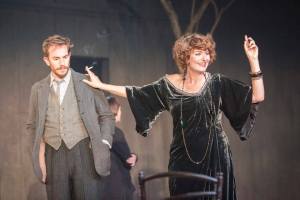 This is the best known of the three Chekhov works performed today and is absolutely dominated by a showstopping performance by Anna Chancellor (pictured above) as domineering mother and actress Irina Nikolaevna Arkadina.

It dramatises the romantic and artistic conflicts between four characters: the fading actress, her son (played by Joshua James, impressive in a range of roles throughout the cycle), an author and ingenue (National favourite Vinall, probably the best reason to see this trilogy displaying huge versatility throughout).

Watching such a body of work in such a short space of time is definitely recommended and these three plays are wonderfully staged and fully justify making such indulgence possible.

We’re also unexpectedly starstruck at several intervals by Miriam Margoyles who’s here for the shows and entertaining the cycle’s predominantly gays and greys in the rooftop bar.