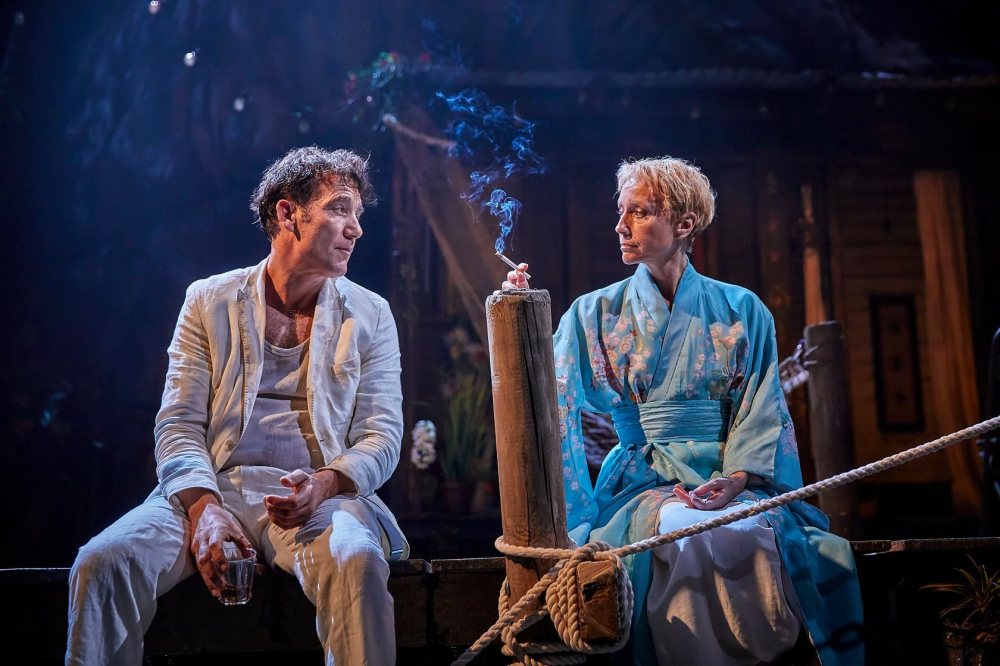 WHERE? Noel Coward Theatre RUNTIME: 180 minutes (with a 20-minute interval)

Two years ago the West End revival of Tennessee Williams’ Cat On A Hot Tin Roof was so scorching it very much needed its onstage shower and so we approached this 1st preview with high hopes on the day that up to 1.5 million people were on the streets of London for this year’s Pride celebrations.

Author Williams would undoubtedly have approved of the Pride crowds and the sighting of an onstage shower stage left made us think that maybe lightening would strike twice with this revival.

It doesn’t quite do so although there is onstage lightening and an imitation onstage rain shower even if the appliance more familiar with bathroom use doesn’t quite come into its own here.

The Night Of The Iguana was Williams’ last real hit and takes place in 1940 on the Mexican hotel verandah where a defrocked priest-turned-tourist-guide seeks shelter with the grieving widow who runs the establishment as she debates whether to take in an ailing 97-year-old poet and his artist granddaughter.

So it’s a little like a darker Mamma Mia without the songs and boasts an understated performance by Lia Williams, shortlisted last year for our Best Theatre Actress monsta for her starring role in The Prime Of Miss Jean Brodie, at its heart.

The Oscar-winning 1964 film version was directed by John Huston and starred Richard Burton as the troubled Rev Shannon, Ava Gardner as hostess Maxine and Deborah Kerr as artist Hannah.

Clive Owen has himself been shortlisted for an Oscar and is compelling as the feverish, twitching priest with a weakness for both alcohol and younger women. But it was Anna Gunn, who TV viewers might be familiar with from Breaking Bad, who had us most convinced as widow Maxine who’d fallen out of love with her recently deceased husband and has designs on Shannon.

This was a 1st preview and we would expect it to lose some of its 3 hour-plus running time before it opens later this month.

For us it didn’t quite reach the heights of Cat on A Hot Tin Roof but it was more than a match for The Glass Menagerie  which transferred to the West End so memorably in 2017.