Sirtis is best known for appearing as Counselor Deanna Troi in Star Trek: The Next Generation until 2002 and so her starring role here, as a former sci-fi actress tracked down by a fan, is a casting triumph as well as being a brave role for her to play.

Dark Sublime is the name of the fictitious show in which Sirtis’ character Marianne appeared in the 80s and the music before the show and throughout its interval wonderfully evoke a world of George And Mildred, Leslie Crowther and ABBA photo spreads in magazine Look In.

The programme (see below) is a beautifully realised evocation of the annuals which proliferated at the time for shows like Blake’s 7 which in some cases contained Shakespearean stars performing plots which, while fantastical, offered both escapism and aspiration that, somewhere, the future might be better than 80s reality. 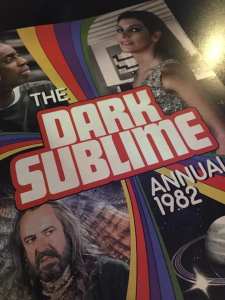 We meet Marianne in the front room of the home she once shared with former girlfriend Kate (Jacqueline King, earnest and hugely believable) who tells the former TV star that she has found a new object of her affection, the younger Suzanne (Sophie Ward, likeable).

Later Marianne is tracked by fan Oli (Kwaku Mills, super enthusiastic, pictured above right) who writes for a website devoted to the show, wants to interview Marianne and later befriends her.

The action is interspersed with scenes from the show in which we see Simon Thorp as Vykar give 1 of those aforementioned full-throated Royal Shakespeare Company-type performances opposite the voice of Mark Gatiss as a rather camp Orac or C3PO-type computer.

The set also has hidden depths and can transform itself into a whirl of flashing lights suggesting the bridge of a spaceship at the flick of a switch.

As the show’s original cast reunite for a convention in Walsall, we appreciate the realisation that nostalgia is not always positive and that some things are better left in the past.

Sirtis never fails to convince in the central role and there’s a great deal of enjoyment to be had with her appearance in such a story. However, we felt that the production was a little too long and would have benefitted from a tighter edit.