Follies has about 25 performances left of a near 100-show run when we encounter one of its stars, Imelda Staunton, for a Q&A on the Olivier Theatre stage where she met her husband, Jim Carter, in a production of Guys And Dolls.

Staunton is asked about how closely she has worked with Stephen Sondheim, who wrote the music and lyrics of Follies.

‘He gives great notes. He was here for the first and second previews,’ remembers Staunton.

‘He saw my first preview in Sweeney Todd in Chichester and said: ‘You have to play Rose.’ (the lead in Gypsy) I thought: ‘Oh god! I always have to be persuaded.

‘I’m so glad for him that this has been so celebrated and that he can be part of it.’

Staunton attributes much of the show’s success to its director Dominic Cooke, who honed the script so the motivations of all the main characters are made most clear.

Perhaps surprisingly, she says: ‘I’ve never really chased musicals or particularly liked going to them. Sondheim’s are like plays, with extremely troubled speeches set to music. He writes for actors and I think that’s why I like them.’

It’s clear Staunton devotes every fibre of her being to her performance and perhaps that’s why she’s so looking forward to getting back to an ordinary life with her husband gardening from 9.50pm on 3 January when Follies closes.

She says: ‘For the big scripts like Sweeney Todd I like to learn the music a year before. For Virginia Woolf it was six months. What that does is give you the language or the alphabet of the performance. It’s not how you say it.

‘What I find most difficult is the rehearsal process. It’s the emotions that you then have to drag up which is what the rehearsals are for. It’s in the rehearsals where you are struggling and struggling for something to be born inside you and that it might not be very nice.

‘Virginia Woolf (earlier this year at the Harold Pinter Theatre) was the most difficult thing I’ve ever rehearsed. Once you’ve captured that emotional response the performance becomes a technical exercise in which you have to plug back into that.’ 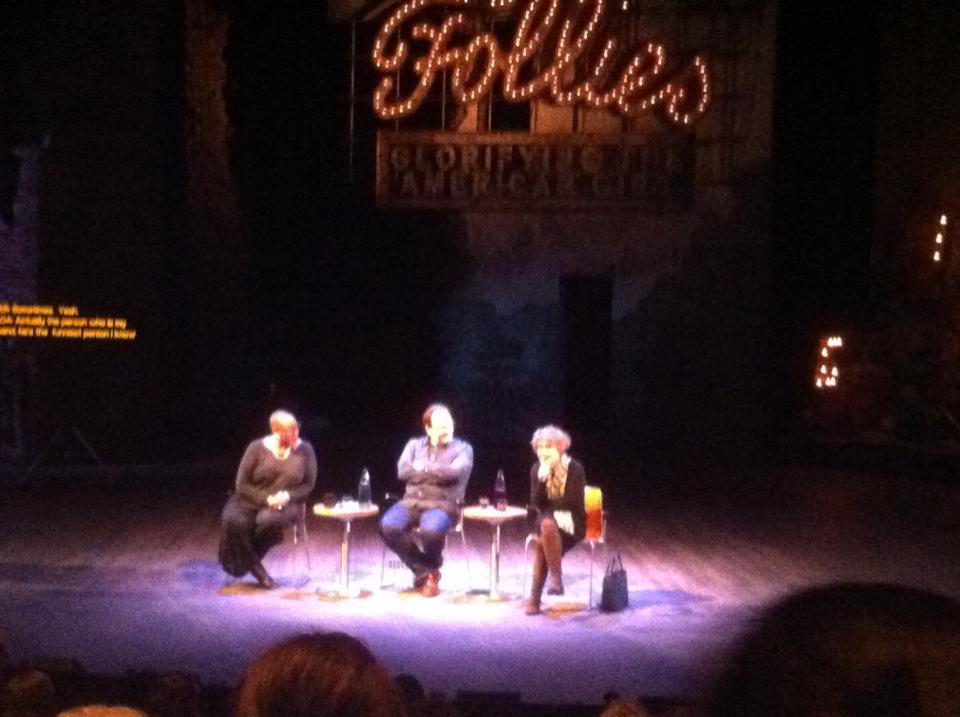 Follies is all about the main characters interacting with their younger selves and an audience member asks what Staunton would tell her younger self?

‘She would be amazed at me now. I’ve always been quite satisfied with whatever I’ve been doing, wherever that is. I’ve never wanted more than I had. I’ve always kept that and I think she’d be quite impressed by that.’

Asked about advice she’d give, she says: ‘Don’t be fooled by that word ‘success’. It should be all about the work that you do. I’d worked for 27 years when things changed for me when I was 47 and Vera Drake (for which she won a BAFTA and was nominated for an Oscar in 2004) came along.’

Asked about regrets, she doesn’t hold back: ‘I did a film with Steven Seagal that I wished I hadn’t wasted my time with because it was absolutely terrible, shockingly bad.’

That happier production where she met her husband on this stage was 21 years ago. As she exits, we’re left to reflect on how her pursuit of working so hard continues to pay off for her and boost the esteem in which she is held.