We’ve been visiting Barcelona regularly since the turn of the century, have owned a flat off Las Ramblas in Raval for the last 15 years and here is our guide to the top 5 must-visit restaurants and bars in this city we love.

Don’t be deceived by the sheer ordinariness of this amazing restaurant’s exterior (pictured above) or the traditional interior (pictured below). It’s in the kitchen where the magic happens. Steer clear of the tourist traps on Las Ramblas for you will find the most mouth-watering tapas we’ve tasted in this city a stone’s throw from the Picasso Museum in Born. Particularly recommended are the feathery light shavings of both duck and jamón ibérico here as well as the signature pan con tomate. Details Looking for a classier and more romantic evening out? Its pricier and more up market sister restaurant Pla is just the ticket.

El Cangrejo means ‘the crab’ in English and that should be all the reassurance you need that this old-school drag bar will be familiar to UK tastes. There’s a lot of banter and the main Spanish speaker in our party reported that it was as filthy as one might find in 1 of our favourite London haunts, Halfway To Heaven. 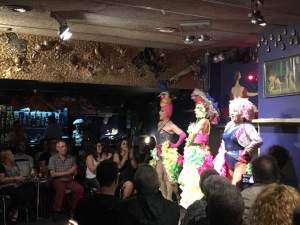 The acts (pictured above) were predominantly lip-synching while singing and we especially enjoyed a Spanish take on Laura Brannigan’s Gloria. (Think Pulp’s Disco 2000 but with more glitter ball (watch below).)

The disco after the acts was reminiscent of the cheesy joy of Eurovision’s EuroClub or London’s schlager parties but with a mix of amazing Spanish tunes we’d not heard before. Hugely recommended.

We live in Raval which was predominantly a red light district when we bought here in the 2000s but the more time we spend here, the more we fall in love with the old town of Born which is further south towards the beach (Raval is like its naughty northern neighbour). Sant Agustina sits like a beacon in Plaza San Agusti Vel and offers some of the finest bacalao and pork we’ve tasted in this city. Its open windows mean its hugely welcoming and it’s definitely a place to take new visitors to the city. Details

Situated on the busy street between the main pedestrianised tourist route Las Ramblas and Placa Sant Jaume, the administrative heart of both the city and surrounding Catalonia boasting both the Palace of the Generalitat of Catalonia and the City Hall, sitting in the window at this impressive bar is perfect for watching the people and the world go by.

You can take monstagigz out of London but you can’t take London out of monstagigz. This pub has been open since 1910 and used to be frequented by the likes of Dalí, Picasso and Hemingway. The décor has an old school glamour and there is both a DJ playing 80s and 90s classic as well as occasional live music.