SETLIST: Desire; Ready To Go; Some Kind Of Heaven; Sunday; People Like Us; Hold On To Me; Miracle; Rolling Stone; Better Than Love; Sandman; Lights; Walk Away; Something I Need To Know; Wonderful Life; Nothing Will Be Bigger Than Us; Wings; Beautiful Ones; All I Want For Christmas Is New Year’s Day; Stay

Current critical opinion would have it that Hurts are somehow trying too hard.

That packing fourth album Desire with songs steeped in hooks designed to snag on first listen is somehow a bad thing.

We’ve seen Hurts many times live and it’s only really when they do something unexpected tonight that the set catches fire. They decide to play an old song we’ve never heard them play live before – the humbug-ridden All I Want For Christmas Is New Year’s Day.

It’s a beautiful moment, not least because of the time of year and Theo’s encouragement for everyone to hug the person next to them but also because he explains it as: ‘Nothing like a song to get you in the mood.’

This is not to say that much of what came before this unexpected encore moment wasn’t thrilling.

In fact it’s when the band take to the stage singing a snatch of the title track of the latest album with two gospel singers at the forefront of the mix that the hairs stand on the backs of our necks.

Of course we’d not heard any of the songs from Desire live before but we’d checked out the setlists that the band had been playing on much of the predominantly eastern European jaunt before tonight. 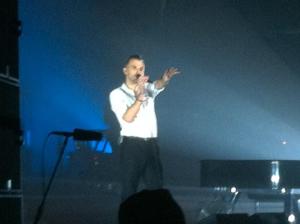 ‘It’s good to finally be playing a gig at home,’ says lead singer Theo Hutchcraft, ‘After playing for more than six weeks away.’

And this enthusiasm for Hurts abroad – and not so much at home – may go some way to explaining the effort with which Theo is selling these songs.

It’s a routine that doubtless works wherever the venue and it is clear to us that we’ve never seen him give it quite so much as he is tonight. He’s working the crowd, beating his chest, urging them to clap and even organising audience singalongs.

Bandmates Theo and Adam are probably wondering what on earth they have to do to get a hit here in the UK after the ear worm last single Ready To Go didn’t sprint up the charts.

Theo, in particular, seems genuinely chuffed by the warm reception the band receive with the audience generous in its singalongs (notably during Somebody To Die For, a song we’d not ever had down as a highlight previously).

Trying hard and giving it your all may not currently be in vogue here in Britain but there’ll always be a devoted audience somewhere for a band writing such catchy as well as genuinely affecting songs.