Everybody deserves a second chance – especially during the greatest show on earth, Melodifestivalen, which has its Andra Chansen on Saturday (4/3). Robin Stjernberg famously won from AC in 2013 but none of our top 5 did.

Lili & Susie threw everything at a Thomas G:son song in 2009 and were beaten in AC by Måns Zelmerlöw (who would win Eurovision outright six years later with Heroes). They were described as MILFs on the show and, while we couldn’t vouch for that, their song is the stuff of schlager dreams. 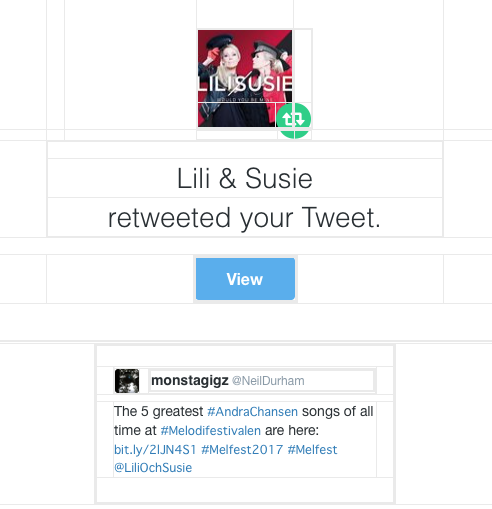 4. Jenny Silver Something In Your Eyes

Another G:son song at 4 which was nudged out (just!) by the unarguably hipper Swingfly in its 2011 heat and then the Red One-penned entry for Love Generation. ABBA has rarely been recognised quite so joyously in MF. A flawless vocal outdone only by its interpretive dancing. And who let those backing dancers in?

We’ve Fredrik Kempe to thank for co-writing this early tilt at Eurovision glory by Ms Nielsen. She would win in MF in 2014 with a very different style only to be undone on the big night by Conchita’s Rise Like A Phoenix and The Common Linnets to finish 3rd. Vågar Du, Vågar Jag made it out of AC to finish 7th in 2007.

Beaten by After Dark and eventual winner Lena Philipsson in her final heat in 2004, The Clamp made it out of AC and changed her costume in an ABBA homage, to finish runner-up to Lena PH. Here’s the original. We’re still astonished we saw Dame Shirley at that legendary final in 2004 but also many years later at the RVT at a Eurofest.

Are they the greatest act never to have represented Sweden in Eurovision? There have been many chances: Blame It On The Disco, Headlines, Stay The Night, Alcastar and the above, which made it out of AC to finish 3rd in 2003.

No self-respecting MF retrospective would be complete without mention of ver ‘Zar. We’re glossing over Alcastar (‘what do you mean we need new white costumes, we’ve blown the budget on that giant glitterball thing-ummy’) which never should’ve darkened AC’s doors in 2005 (the year they were in their imperial phase and turned down the Beeb’s Eurovision offer).

They romped to 3rd in 2003 with one of Melodifestivalen’s greatest ever performances. This isn’t that performance. This is its predecessor. The 1 where any attempt at choreography is thrown to the wind and instead we could be watching 4 strangers, who’ve just met, shuffling about as if on the Tube (in matching red outfits with iconic Charlie’s Angels lighting, a gorgeous opening piano moment and accompanying signature halo dance moves thrown in):