You may have heard the rumours about Glee star Amber Riley’s (pictured right above) showstopping performance in this first West End production of this 1981 Broadway hit sparking multiple midshow standing ovations. They’re all true.

We were at the fifth preview of the West End debut of this show, which doesn’t actually open until 14 December.

Our enduring impression was what an apt calling card Glee has proved for Riley and what a fine voice she has, capable of switching from righteous booming indignation to utter whispered heartbreak in a note.

We can’t imagine why she has yet to release an album or toured since earning her big break in the Fox TV show about a school choir of misfits.

The last four musicals at the Savoy – Gypsy, Guys and Dolls, Funny Girl and, now Dreamgirls – have all been 5* experiences for us. It’s a venue which has become synonymous with the best in musical theatre, often with an award-winning role at its heart.

For us, Dreamgirls is an uneven musical. Essentially it appears to be the story of The Supremes with a girl group torn apart when its most telegenic member is thrust centre stage. It reminds us of Funny Girl because the show’s beating heart, Riley’s character Effie White, is initially cast aside because of her unconventional looks despite boasting the most talent.

The story is neither as humorous nor deep as Funny Girl but Riley’s outstanding voice on hits such as I Am Changing, One Night Only, Listen and that staple of talent shows, And I Am Telling You I’m Not Going, spur the audience to its feet.

We also fell in love with Joe Aaron Reid in In The Heights last year and here he convinces playing against type. 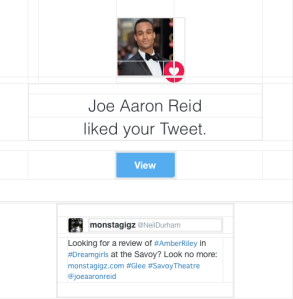 Dreamgirls is the must-see musical of the moment and Riley’s about to bring glee to your life.